“Lion Slain by an Ant”

Richard the Lionheart, Christendom’s preux chevalier, died at the age of forty-two during Lent, in April 1199, of gangrene. The deadly infection was the result of a crossbow wound inflicted in a lucky shot by a youth of no account, during a three day siege of the minor fortress of Châlus belonging to the count of Limoge, one of Richard’s periodically rebellious vassals, conducted in a dispute with the count over a non-existent treasure.

The warrior king was broke—because he was a warrior king—and he wanted the treasure to replenish his coffers. The place was defended by three knights, three dozen kitchen knaves and peasant refugees, all terrified by the appearance of the great king with his famous mercenary army.

When Richard rode out to reconnoiter the field accompanied by Mercadier, the captain of his rent-an-army, the great crusader had disdained to don his shirt of mail. The quarrel buried itself in the royal nape and the barber-surgeon hacked out everything but the tip; the lion brought down by an ant, the balladeers wailed.

Fontevraud abbey–view of the nave

Pious Christians ascribed the Lionheart’s death to God’s punishment for the desecration of the holy season. The bolt that brought down the king came from his own ranks. The young crossbowman had been collecting the enemy’s missiles all day, shielding himself with a large frying pan, since his ammunition was long exhausted.

The Holy Father had outlawed the use of the crossbow as an un-Christian weapon, but the most chivalrous knight in Christendom continued to hire the un-chivalrous foreign marksmen and low-born mercenaries like Mercadier, Lupescaire and Martin Algais, men “raised up from the dust”, to wage war against his enemies and to advise him as his confidants and even the administrators of his domains.

Contemporaries saw Richard’s death the more ominous since it came at the close of a century, a time rife with apocalyptic visions, of rumors about the birth of the Anti-Christ, somewhere, which had been seen as the cause and the result of the latest wars, famines, conflagrations, and the impieties of rulers and commoners alike. But not even the most pious and credulous would have predicted the consequences of Coeur de Lion’s death.

Richard’s continental possessions which he had inherited through his
father, Henry II, and through his mother Aliénor, the duchess of Aquitaine, passed to John, his last brother. Five years later, John lost the duchy of Normandy, the county of Anjou, and by a whisker the county of Poitou, to the Plantagenets’ overlord and next-door neighbor, the French clerkish king, Philip Augustus.

In 1199, Philip was about thirty-five, blind in one eye, terrified of horses and assassinations and incapable of more than one marital act with Ingeborg, his lawful Danish queen. He shut her up in a series of convent-fortresses and married his mistress. The Holy Father was not pleased, but at least this time the king was. Philip was also Richard’s and Johns stepbrother, since Aliénor had been married to Philip’s father, Louix VII, for fifteen frustrating years. 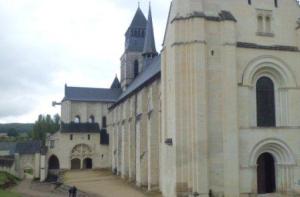 By mutual consent, Aliénor had rid herself of an irritatingly pious husband, but also deprived the French monarchy of the prized duchy of Aquitaine which as its fifteen year old heiress, she had brought to the marriage bed. Along with Aquitaine, Aliénor also brought to her new marriage a hornet’s nest of independence-loving and combative southern vassals of Poitou and Aquitaine, to add to her husband’s already mutinous barons of Anjou.

Contrary to popular belief, a king’s word was not his command. A complex system of local laws, customs and traditions, along with often empty treasuries, kept monarchs from ruling as all-powerful sovereigns. Often a vassal was more powerful than his liege—in lands, resources, and sheer military strength.

One way for a ruler to enforce obedience to his law was through force, an extremely costly and uncertain undertaking, or through an army of clerks and lawyers—ultimately a far more effective if unglamorous approach. In the end, an efficient royal bureaucracy increased the king’s revenues which in turn paid for the armies. That was a lesson Philip Augustus of the Capetian line had learned well and one which the flamboyant Plantagenets learned more painfully.

Aliénor, Henry, and their sons would spend their lifetimes fighting, bribing, and bullying their continental subjects of Poitou and Anjou. Foremost among them were the counts of Angoulême and the upstart lords of Lusignan.

The Lusignans, a large but tightly knit family which produced ten generations of turbulent, vigorous and unscrupulous leaders, as one historian describes them, seemed bent on creating a new southern principality for themselves, and actually realized their ambitions most successfully in the Holy Land as the kings of Jerusalem, Cyprus, and Armenia.

Having battled during her almost four score years two husband-kings, her rebellious vassals, Emperors, Saracens, and popes, Aliénor faced the real prospect of losing it all when the Lionheart’s inheritance passed to her last-born son. Henry used to call John Lackland, for the amusement of it, while he amused himself with his mistresses to his wife’s great annoyance.

Aliénor got her own back by rousing her sons against their sire—an easy enough proposition considering the temperaments of their offsprings—whereupon her husband defeated his disloyal sons, reconciled with them, but imprisoned his implacable matrimonial foe for fifteen years.

The queen-duchess did not emerge until after Henry’s death, to outlive him by an equal number of years while she tried to protect the thirty-two year old John from himself. Death at the age of 82 at the abbey of Fontevraud did not spare Aliénor of Aquitaine the knowledge that she had failed. 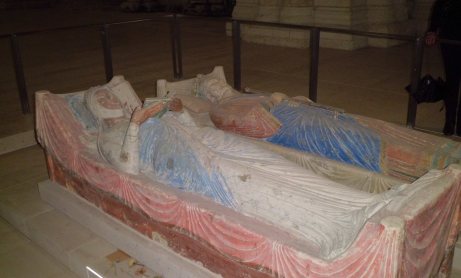 It is said Richard that forgave his attacker, a gesture as Christian as it was chivalrous, and ordered him to be released with a generous gift of one hundred English shillings. The young man stood before the supine king stupified and incredulous, and well he should have been.

As soon as the king’s eyes were closed and his chin bound up, Mercadier, who had on Richard’s orders already stormed the little fortress and hanged all the survivors save the crossbowman, seized the young man and sent him to Richard’s favorite sister Joanna, the countess of Toulouse. It is said that Joanna had the young man’s eyes gouged out, flayed alive, and finally had him torn apart by horses.
Sic transit Gloria mundi.