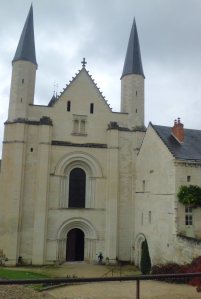 This motto was chosen by Robert d’Arbissel for his foundation, reflecting his dedication to the Blessed Virgin, and indicating his belief that the abbey ought to be in the hands of a woman, the abbess.

Robert d’Arbissel, a charismatic hermit who preached to the people of Anjou at the request of Pope Urban II founded the abbey in 1101. It started as a humble community of faithful men and women wanting to imitate the simple life of Christ in the vast forests on the borders of Anjou, Touraine and Poitou, but much like other medieval monastic foundations, it did not remain poor long.

Local lords and the faithful entering the order provided endowments and donations. The order cared for the despised and miserable of the land, the lepers in St. Lazarus, and “fallen women” in St. Magdalene.

Abbey kitchens–gift of Eleanor of Aquitaine

The construction started in 1104 and was completed about 1150. Pope Calixtus II consecrated the chancel in 1119, dedicated to the Blessed Virgin Mary. During the 12th century, the membership of the order grew to nearly 5,000 with about 100 priories, in France and a few in Spain and England.

Over the 700 years of the abbey’s existence, all thirty-six abbesses who ruled it came from princely ranks, and its nuns came from the nobility as well. In the 12th century, the abbey and its vast holdings were governed by Mathilda of Anjou, the aunt of Henry II Plantagenet.