We breezed past Saint Maixent-l’École to get to Parthenay, again approached via a fairly flat ground. Parthenay has a population of about 10,000 and I worried, of course, about driving down a maze of streets to find the hotel, but this time, we drove right up to it.

Hotel St. Jacques is named, like most of the place, after St. James since Parthenay sits on a secondary pilgrim route to Campostella, a mere 1,492.2 km to go.

The hotel showed wear and tear of its age, but the staff was very pleasant, the room adequate, the bathroom clean, the breakfast good enough to send us off exploring. 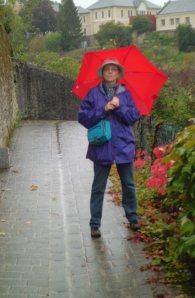 It rained, intermittently again, but it was not cold, just muggy. Armed with umbrellas and rain jackets, we explored. The majority of the little shops and restaurants in the historical parts of the city were closed for the season—of course, but that meant we could enjoy the rest of this is amazing place. 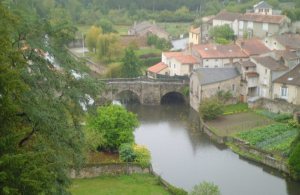 Parthenay is much bigger than I had ever imagined. At one time it was surrounded by three walls and considered impregnable.  Like Lusignan, it sits on an outcropping of granite overlooking a sharp bend of the Thouet river.

Its medieval past is well preserved in the town with its steep, narrow  streets, the timbered houses, little side streets, the remains of pilgrims’ inns and shops and houses of wealthy weavers, and several churches of limestone. 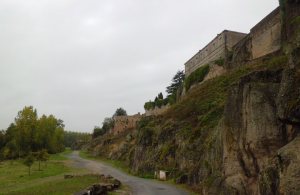 We got lost, and ended up walking out of the old town to the base and then hiking along the river plain, with the remains of the ramparts on which Parthenay sits above us. 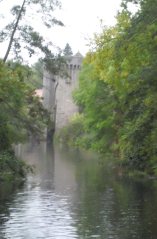 It started raining steadily and so we hiked across a narrow footbridge across the river to get to the other side of the valley and figure out where the heck we were. I was freaking out about crossing the bridge, but had no choice. It turned out that the look from the other side of the valley was worth the momentary terror, and we had subsequently returned there to explore that medieval ‘suburb’ of Parthenay, including the medievally-inspired gardens (Jardin Férolle).

Thankfully, more of Parthenay’s citadel and fortifications are preserved than of Lusignan’s, and several are outstanding structures. The most famous is the ‘beaked’ St. Jacque’s twin gate at the old bridge spanning the Thouet, and the similarly constructed gate to the fortress.

Parts of the fortifications and the gates were rebuilt over the centuries, but this place is so wonderfully evocative that I borrowed all of it for my description of Parthenay—“historical” Puritans be damned.

The lords of Lusignan and the lords of Parthenay intermarried, so Parthenay also forms part of Pays de Mélusine (“Mélusine country”).  We weren’t looking for her, we really weren’t, and yet— 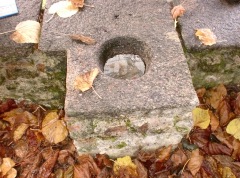 We happened to stumble upon a lovely B&B (which we intended to stay at in the first place, but that’s another story…). M. Yvan Pied graciously allowed us into the “Le Grand Logis” on Rue Ledain—what a wonderful, charming place with a lovely garden overlooking the valley and the fortress on the opposite side of the valley—and a garden with a crystal clear spring where Mélusine is supposed to reside.

So perhaps she meant me to find her after all….

I am a historian who writes 'history with a story' in off-duty hours.
View all posts by Hana Samek Norton →
This entry was posted in book promo, history notes, random thoughts and tagged France, historical fiction, historical research, Lusignans, Mélusine, Parthenay. Bookmark the permalink.